In 1970, Tim (Khiem) and Cathy (Thuy) Tran were top international students from South Vietnam who were awarded scholarships to study in the United States.  They studied for two years at Pacific University in Oregon, after which Tim pursued his undergraduate degree at the University of California, Berkeley, and Cathy finished her degree at the University of Oregon.  Per the conditions of their scholarships, the two returned to South Vietnam in 1974.  When Saigon was overrun by communist forces in 1975, the family endured great hardships. In 1979, Tim and Cathy managed to escape via boat.  After a harrowing, life-threating voyage they were placed in a refugee camp in Malaysia.

Eventually the Trans were able to immigrate to the United States and became naturalized citizens in 1986. Tim went on to become the Chief Financial Officer of Johnstone Supply, and Cathy worked for U.S. Bank, then Standard Insurance, and became an accounting manager. In 2017, the Trans established a Library Endowment Fund at Pacific University. In honor of their gift, the library building on the Pacific University Forest Grove campus was dedicated as the Tim and Cathy Tran Library.

Tim Tran, Vietnamese name Tran Manh Khiem, is born in the small Vietnamese village, the son of a civil servant and homemaker.

At age 4, Tran and his family escape Communist North Vietnam on a US Navy Landing Craft headed to South Vietnam and eventually settle near Saigon.
Arrival in U.S.A.

Tim and his future wife, Cathy (Vietnamese name Thuy Trinh), are awarded scholarships to study in the United States. Their scholarships soon bring them to Pacific University at Forest Grove, Oregon.

“How do you spell the word ‘opportunity’?
I prefer to spell it with three letters: U.S.A.” — Tim Tran

Tran transfers to the University of California, Berkeley to study accounting and finance.

Tim graduates with honors from the University of California, Berkley with a Bachelor of Science, Business Administration, Accounting & Finance. As a condition of their scholarships, Tim and Cathy must return to South Vietnam following graduation.
Back in Vietnam

Tim lands a job in Saigon as an internal auditor for Shell Oil Company, Vietnam.

“The communists overran Saigon in April 1975, and I got stuck. Everything happened so fast and there wasn’t enough time (to escape.)” — Tim Tran

Tim and Cathy marry in a small ceremony just one month after the fall of Saigon.

Tim is laid off when Shell Oil is nationalized by the new regime. He is viewed with suspicion by the Communists, who suspect the U.S.-educated citizen is a spy.

Tran’s sister, Thao, manages to escape Vietnam alone and is welcomed and sponsored by friends of Tim’s from Pacific University.

“Every waking moment I was thinking about how do I get out.” — Tim Tran

During a failed attempt to flee Vietnam, Tim’s Father is murdered by criminals.

Tran, his wife Cathy, a brother and a sister escape in a rickety, overcrowded boat with 350 other refugees. After seven days at sea and seven robberies by groups of pirates, they arrive at a refugee camp in Malaysia.

Eventually Tim’s sister Thao is able to sponsor Tran and his family to come to Portland, Oregon.
Return to U.S.A.

Tim Tran arrives in Oregon and obtains an accounting job with Johnstone Supply, Inc.  Cathy becomes an accountant in the controller’s division of U.S. Bank. 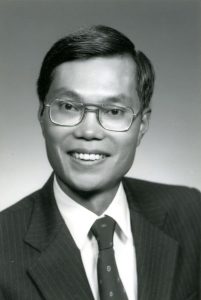 Tim Tran is named Vice President of Finance at Johnstone Supply in 1985.

Tim and Cathy Tran become naturalized citizens of the United States of America.

“My philosophy is to look forward. I have survived the past and it’s taught me a great deal…I’m stopping to smell the roses.” — Tim Tran

Tran sponsors his mother and sister to come to Oregon from Ho Chi Minh City.

Retires from Johnstone Supply as Vice President, Finance and CFO.

Serves as Trustee on Board of Trustees, Pacific University, Forest Grove, Oregon.

The Trans establish an endowment for the Pacific University Libraries.

“What we have done is just a small way to pay back what we received from Pacific – the kindness and the support from the university and from some very special people.” — Tim Tran

The library at Pacific University’s Forest Grove campus was renamed in honor of Tim (Khiem) and Cathy (Thuy) Tran.

“Coming here today and attending this dedication is the completion of a long journey of 38 years and more than 10,000 miles,” he said. “I’m glad it ended right here.”
— Tim Tran 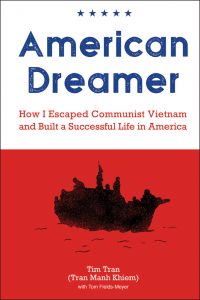 “I hope people will remember me as an American, a naturalized citizen of the United States of America who, through hard work and determination, overcame most of the difficulties and hardships that were thrown my way, who attained some modest success and had the opportunity to give back. I will be forever grateful to the country that I adopted and that adopted me, and to all of the people who helped me along the way.” — Tim Tran, Author of American Dreamer 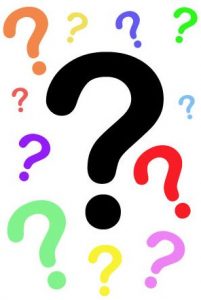 “I have often heard people say, ‘It’s great to serve your country!’ I would love to have the opportunity to serve my country, the United States of America, because I feel so fortunate to have a great country to serve.” — Tim Tran